(Bloomberg) — Saudi Aramco taking the crown of the world’s most valuable company from Apple Inc. underscores investors’ appetite for oil and gas as the countries around the globe battle rampant inflation and fear of energy shortages. 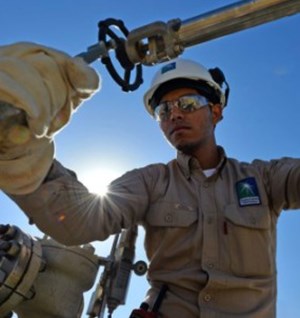 Buying the future through tech stocks is taking a back seat to the concerns of the present, as fossil fuels reassert their critical importance in all aspects of daily life. Elevated inflation is underpinned by rising energy costs that ripple through all aspects of the economy, from food to flying.

For much of the past decade, low oil and gas prices and muffled inflation allowed central banks to reduce rates to spur their economies in the long exit from the financial crisis in 2008. Investors took the opportunity to buy into the new economy built on technology as the consumers transitioned toward a low-carbon future.

But the global economy still runs on oil and gas, and surging demand after the pandemic combined with Russia’s invasion of Ukraine is causing a shortfall in supplies that plays right into the hands of traditional energy producers. Aramco now trades near the highest on record and nine of the top ten stocks in the S&P 500 Index this year are oil and gas companies. Energy has nearly doubled its share of the index this year, with domestic shale producers and refiners leading the charge.

Even so, the reversal from tech to oil and gas still has some way to go. Despite losing a third of its value this year, Tesla Inc.’s market capitalization is more than double that of Exxon Mobil Corp.

By Anthony Di Paola and Vivian Nereim on 12/6/2020 (Bloomberg) –Just days before a high-stakes OPEC meeting to support an oil market ravaged by coronavirus, the United Arab Emirates’ state oil […]

By Jennifer A. Dlouhy on 4/16/2021 Methane emissions come from a variety of sources, including livestock. WASHINGTON (Bloomberg) –The Biden administration is considering singling out the oil industry’s methane […]

5/14/2021 Seadrill Limited announced a new contract has been secured by Sonadrill Holding Ltd, the 50/50 joint venture with an affiliate of Sonangol E.P. Sonadrill has secured a twelve well contract […]