Offshore Energies UK has given its backing to plans by Equinor and its partners to progress a major oil and gas field on the UK continental shelf (UKCS). 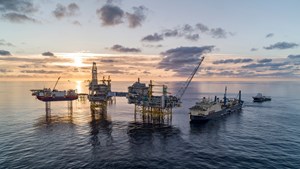 At its peak the Rosebank field, which lies about 81 miles north-west of Shetland, is predicted to produce 69,000 barrels of oil (9,000 tons) per day. This would be roughly equivalent to 8% of the UK’s entire output between 2026 and 2030, Equinor said in an announcement today.

It would also produce about 44 million cubic feet of gas (1.2 million cubic meters) per day in its first 10 years – enough to supply two cities the size of Brighton or Norwich. In Scotland the equivalent would be a city the size of Aberdeen.

The development would also have economic benefits. If approved Rosebank is predicted by Equinor to create £8.1 billion of direct investment of which £6.3 billion could go to UK-based businesses

The Rosebank field, discovered in 2004 and named after a variety of Scottish malt whisky, lies in the Atlantic where the ocean depth is about 3,500 feet. The oil and gas field lies another 9,000 feet under the seabed.

Rosebank could also be among the first UKCS developments to be powered by renewable electricity. This would mean reduced reliance on gas-powered generators and so would mean less CO2 emissions from oil and gas production. Equinor is considering a range of options to power the development including using offshore windfarms, as well as running cables to shore.

The development could play an important role in establishing the infrastructure necessary for the electrification of all oil and gas operations west of Shetland.

Ross Dornan, OEUK’s energy market intelligence manager, said: “Rosebank is an exciting development that could set new standards for the UK offshore industry in terms of reducing greenhouse gas emissions. The electrification of oil and gas production is a vital step in meeting the industry’s commitment to cutting emissions by 50% by 2030.”

A socioeconomic study by Wood Mackenzie and Voar Energy, commissioned by Equinor, has estimated that, over its lifetime, Rosebank will generate £24 billion of gross added value – meaning direct, indirect and induced economic benefits.

“In human terms it will generate many hundreds of jobs, support training and boost the development of the regional supply chain. The people employed in this project will also develop engineering and other skills essential for the expansion of offshore wind and other low-carbon energies.”

President Joe Biden and Senate Democrats have revived their progressive “Build Back Better” agenda to continue an almost two yearlong spending spree, paid for with debt and tax hikes on nearly every American. Few ideas […]